This is an out-of-date document. Please see the most recent version.

People always like to know what new things we're working on, and we enjoy being open with our plans. This document is an overview of the many new products and projects we're currently working on here at Looney Labs. This list ranges from games we're almost ready to print, to others that are very much still on the drawing board. Many of these projects will require extensive development time, not to mention investment capital, and some may never emerge at all (as you can see by looking at older versions of this document). There is no guarantee we will actually follow through with anything on this page; this is just a list of things we're thinking about and planning for at this time. Everything here is subject to change.

On the Front Burners:

Chrononauts: Lost Identities: Now in the final stages of production, this will be a clear booster pack of 15 cards, like Fluxx Blanxx, including a cover card, a new Mission card ("The Most Toys") and 13 all-new Identity cards featuring the winners of the Lost Identities Nanofiction Writing Contest.

Nanofictionary: The card game of telling tiny stories is now in Beta-testing and it's going very well. It's been getting lots of praise as well as plenty of useful suggestions, which Andy is even now taking into account as he updates the rules for the next round of playtesting. But the bad news is, we've come to realize that we just don't have enough time left now to get this product into full release before Christmas. There's still too much to do, and we still haven't quite gotten used to the amount of lead time our distribution network requires for solicitation of new products. But the good new is, Nanofictionary is showing all the signs of being another hit for us. It will be debuted at Toy Fair in New York in February.

Icehouse: Fifth Edition: Although the clear plastic box of Icehouse pieces was a dream come true to create, the format has proved itself sub-optimal. The boxes are expensive and easily broken, and making books to fit the box has also been costly, due to the necessarily non-standard size. So when the current edition sells out (sometime this fall), it will be discontinued. The new version will be packaged in a regular cardboard gamebox, just a tad larger than a standard trade paperback book (see below) and tall enough to receive said book and sixty Icehouse pyramids. We also plan to include an inexpensive drawstring bag. However, we don't plan to release Fifth Edition until sometime next year. In the interim, we plan first to make the pieces available a la carte, followed by the new rulebook once it becomes available, and at some point after that, we'll do a big print run that includes all these elements, which we will call Fifth Edition. 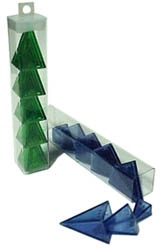 Icehouse Pieces (by the stash): Someone on the icehouse mailing list suggested packaging a single set of Icehouse pieces in a plastic tube, like the dice-only edition of Cosmic Wimpout. We really started liking this idea when Kristin found a place that could make us the perfect tubes -- rather than round, these have a square cross-section that is just the right size to accomodate a large Icehouse piece! So, we're going to begin making Icehouse pieces available by the stash, packaged in these tubes. They'll be available in a full range of 9 colors, including for the first time purple, orange, and opaque white.

The Icehouse Handbook: Nine Games for Sixty Pyramids: As noted, the next version of the rules for Icehouse games will be published in a single trade paperback-sized volume. This new book will set the standard for future volumes of Icehouse rulebooks, which will include a glossy paperback cover and be 5.5" x 8.5" in size. The new edition of the Icehouse Handbook will include just the rules to Icehouse, along with IceTowers, Martian Chess, IceTraders, Gnostica, Zendo, IceChess (with a new name?), RAMbots, and one other game that we're still trying to make up our minds about. (It will also include a bonus 10th game, Volcano, which will whet the appetite for expansion colors since it requires 80 pyramids (and therefore can't be counted as one of the nine, but which is just too good to leave out of the book).) The new Icehouse Handbook will also feature an introduction to Icehouse gaming by Jacob Davenport.

The Empty City: The next book in the series (which actually will probably come out first) will be a re-issue of the original novel, with a new introduction by Alison Frane and perhaps some author's notes or something. "The Martian Archaeological Society" will be included as a epilogue to the original story (with the nanofics from the Martian Chess Set edition sneaking into otherwise-empty spaces in the Icehouse Handbook).

Alison's Chessboard: The chessboard bandanna we created to include in Black Ice will be made into a product of its own. Like the current edition of Icehouse, the Black Ice expansion will be discontinued when the current supplies run out.

The Black Ice Book: The product currently known as Black Ice includes a little card declaring itself to be a Beta release and promising to someday be worth a copy of a yet-to-be-released book. At the time, we were selling Icehouse in the Martian Chess Set edition and were planning to create more small books in the style of the three included with that product. The Black Ice book mentioned on the coupon was to be one of these new books, but since we've since decided to switch to the trade paperbook format for our rulebooks, we no longer envision publishing any more of those little books. Also, we had hoped to develop a "killer ap" game that used only the two colors included in the Black Ice set, and this has yet to happen. So, our plans have evolved. But we still plan to make good on those little square coupons one of these days... given all our current plans, what do people think would be both fair and worthwhile to cash them in for?

The Dangling Carrot: We're building a special section of our online gift shop that we'll be calling the Dangling Carrot, where we'll be making various special items available only to those who earn Mad Lab Rabbit points by putting on demos, running tournaments, and otherwise helping us promote our games. Items in the Dangling Carrot will include Lab Coats, T-shirts and short run items like the hemp Black Ice drawstring bag (which we just can't get produced cheaply enough to wholesale).

Behind the Scenes Stuff: In addition to all these exciting releases, we're up to our eyebrows in work that isn't as obvious. We're in the process of outsourcing our warehousing & fulfillment work, which includes a massive re-construction of our online shopping center. (Kristin had a long technical meeting today with Gregg, the programmer from ACMS who is building our new system... the schedule is tight, but things seem to be progressing well.) Also of course, we're still in the midst of the summer convention season, and we're still getting the Mad Lab Rabbit program going, and in order to get all these new releases printed (along with more of our hits like Fluxx and Chrononauts), Kristin has had to seek out additional funding... anyway, as always, we remain very very busy.

On the Back Burner:

Chrononauts: The Next Section of the TimeLine: While Lost Ids will add new spice to Chrononauts, many players are already hankering for a new set of Timeline cards that extends or precedes the history of the original game. However, while I've had some neat ideas for this and I've heard a lot of others, I'm not working on this with any seriousness at this time. It took a lot of time and research to create the first Timeline and I used up most of my good ideas on that one. However, some enthusiastic Chrononauts fans have talked about creating there own timelines. In fact, Zarf has already been playtesting a game called "The Emperor's Star" which uses expanded rules and a set of three Timelines. So, if you're thinking of researching and creating your own Timeline, feel free. We might even offer to publish it someday. (But don't plan on publishing it yourself or selling it to another game company, since I've applied for a patent on the game mechanic embodied by the Timeline.)

The Gnostica Tarot Deck, the Icebreaker Re-release, and Fluxx++: These are just some of the things we'd like to release someday, but which no one is really working on at all right now. Nothing much has changed since the stale thoughts about them in the last version of What's on the Stove?